Building a stupa is considered extremely beneficial, leaving very positive karmic imprints in the mind. Future benefits from this action result in fortunate rebirths. Fortunate worldly benefits will be the result, such as being born into a rich family, having a beautiful body, a nice voice, being attractive, bringing joy to others, and having a long and happy life in which one’s wishes are quickly fulfilled. On the absolute level, one will also be able quickly to reach enlightenment.

In the Karmavibhanga Sutra, it is said:

The Buddha spoke to the young Brahmin Shuka:
They are eighteen benefits of building a Tathagata Stupa. What are these eighteen?

These eighteen points are the benefits of building a Tathagata Stupa.

In the Manjushri Mula Tantra, it is said:

If one builds a Stupa with one’s own hands in order to purify one’s body, one will be able to do so, even if one has committed the five heinous crimes. If one builds one hundred thousand Stupas, one will become the Universal Ruler of all Knowledge-Holders, completely understanding all scriptures and being endowed with skills and wisdom during an abiding Aeon. After death, one will always be born as a king and never go to the three lower realms. Like the sun rising in a central country, one will be endowed with all sense faculties, retaining what one has learned and remembering one’s former lives.

In the Sutra called “ Casket of Secret Relics”, it is said:

Whoever places images of the Buddha in a Stupa, that person will be blessed with the nature of the seven precious jewels of the Tathagata images. Whoever pays reverence and respect to this Stupa, will become non-returners and will eventually completely and perfectly awaken to the unsurpassed and utterly perfect enlightenment.

Even if one offers only one prostration or makes one single circumambulation, one will be completely freed from going to places like the Avici Hell. One will never fall away from the (path to) unexcelled and completely perfect enlightenment. Also the area around this Stupa and images will be blessed by all Tathagatas.

In the Saddharma Pundarika Sutra, it is said:

Walls are built from mud and bricks and a Stupa of the Jina is made likewise.
Therefore, even if it is built from heaps of dust;
Whoever builds a Stupa for the sake of the Jina, in remote places of suffering;
Even if it is made of a heap of sand, by children playing games;
(The builder) will reach enlightenment.

The benefit of presenting offerings (to a Stupa) are stated in the Sutra requested by Prasenajid:

If one washes white a Buddha Stupa:
One will have a long life in the worlds of gods and men.
One’s body and mind will be free from sickness.
One will overcome all suffering.
One will attain permanent happiness and will be wealthy.

If one rings a bell in front of a Buddha Stupa:
One will have charismatic speech and great fame.
One will gain the pleasant voice of Brahma and remember one’s previous lives.

Whoever among the scholars, turns his mala with a devoted mind in front of a Sugata Stupa:
Will be well presented with many precious golden malas.
Will attain various ornaments.
And will become the foremost among the meritorious and fortunate ones.

Whoever offers to a Stupa of the Jina, the sound of music:
Will gain perfect confidence in profundity and knowledge.
One will have a perfect physical form and a pure mind and speech.
One’s speech will fill the world

If people fix various beautiful banners at an essential reliquary (Stupa), which is the source of immaculate merit, they themselves will receive offerings as they are now an offering field for the three worlds.

If one cleans a Buddha Stupa:
One will become beautiful and attractive.
One will have a noble face and the complexion of a lotus.
One will be completely free from defects of samsara.

Whoever cleans the dust around a Stupa, with clean water in the spring time, will be pleasantly fanned by ladies holding golden handled fans.

Concerning the benefits of prostrating and circumambulating a Stupa, it is said in the Avalokiteshvara Sutra:

In the Saddharma Pundarika Sutra, it is said:

Whoever joins their palms before a Stupa, whether with two hands or just one;
Whoever just one time bows their body, or even briefly bends their head;
Whoever prostrates or merely says “Buddha” with a distracted mind, whether once or several times before places where relics are kept;
That one will attain supreme enlightenment.

In the Caitya Pradakshina Ghata, it is said:

The qualities of circumambulating a Stupa of the Protector of the World cannot be described properly with mere words. 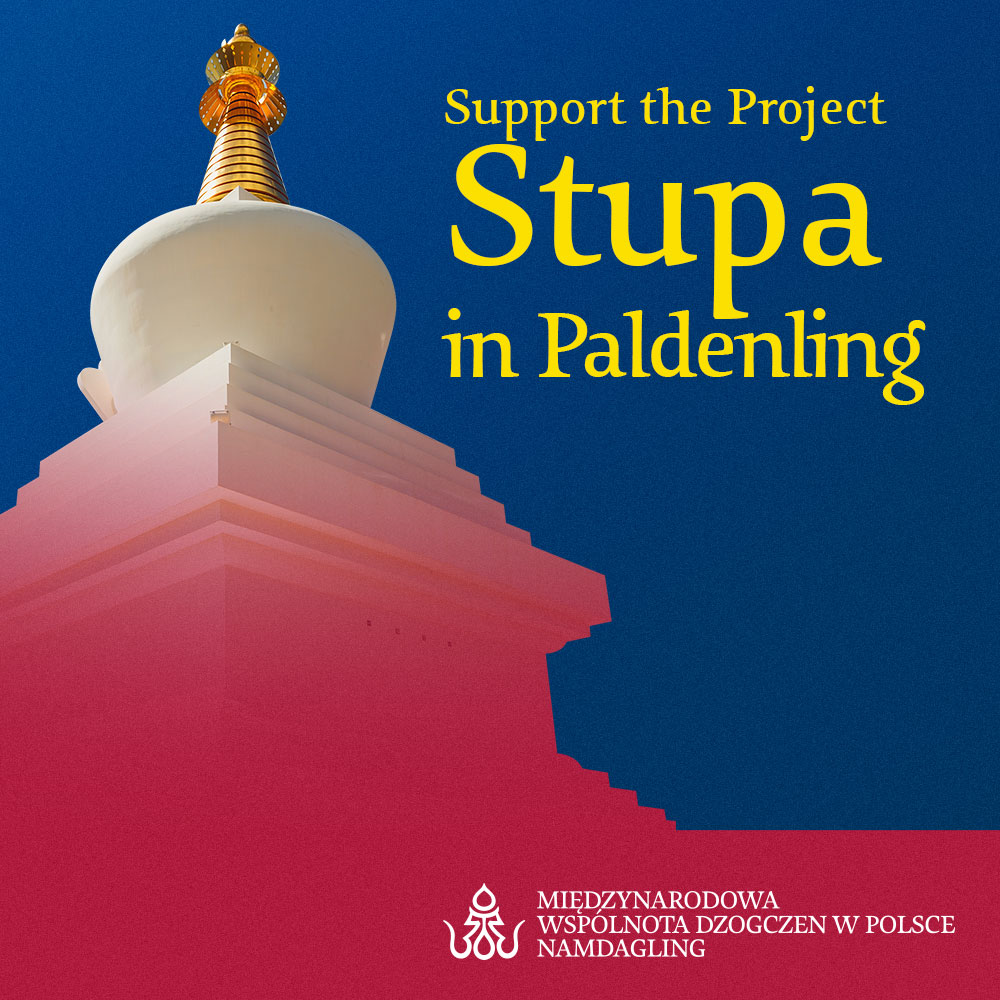 Stupas in Tibet and Bhutan are usually called chorten in English, reflecting the term in the Tibetan language. There are eight different kinds of stupas in Tibetan Buddhism, each referring to major events in the Buddha’s life.[39]

Also known as “Stupa of Heaped Lotuses” or “Birth of the Sugata Stupa,” this stupa refers to the birth of Gautama Buddha. “At birth Buddha took seven steps in each of the four directions”[39] (East, South, West and North). In each direction lotuses sprang up, symbolizing the brahmavihāras: love, compassion, joy and equanimity. The base of this stupa is circular and has four steps, and it is decorated with lotus-petal designs. Occasionally, seven heaped lotus steps are constructed. These refer to the seven first steps of the Buddha.

Enlightenment Stupa at Ogoy Island, Russia
Also known as the “Stupa of the Conquest of Mara”, this stupa symbolizes the 35-year-old Buddha’s attainment of enlightenment under the bodhi tree in Bodh Gaya, where he conquered worldly temptations and attacks, manifesting in the form of Mara.

Stupa of Many Doors

This stupa is also known as the “Stupa of Many Gates”. After reaching enlightenment, the Buddha taught his first students in a deer park near Sarnath. The series of doors on each side of the steps represents the first teachings: the Four Noble Truths, the Six Pāramitās, the Noble Eightfold Path and the Twelve Nidānas.

Stupa of Descent from the God Realm

At 42 years of age, Buddha spent a summer retreat in the Tuṣita Heaven where his mother had taken rebirth. In order to repay her kindness he taught the dharma to her reincarnation. Local inhabitants built a stupa in Sankassa in order to commemorate this event. This type of stupa is characterized by having a central projection at each side containing a triple ladder or steps.

Also known as the “Stupa of Conquest of the Tirthikas”, this stupa refers to various miracles performed by the Buddha when he was 50 years old. Legend claims that he overpowered maras and heretics by engaging them in intellectual arguments and also by performing miracles. This stupa was raised by the Lichavi kingdom to commemorate the event.

This stupa commemorates the Buddha’s resolution of a dispute among the sangha. A stupa in this design was built in the kingdom of Magadha, where the reconciliation occurred. It has four octagonal steps with equal sides.

This stupa commemorates Buddha’s successful prolonging of his life by three months. It has only three steps, which are circular and unadorned.

This stupa refers to the death of the Buddha when he was 80 years old. It symbolizes his complete absorption into the highest state of mind. It is bell-shaped and usually unornamented.

Stupa symbolism (click on the drawing to make it bigger) 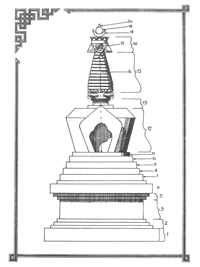 1. The base of the stupa symbolizes ten noble activities:

2. The three steps above the platform symbolize the three objects of refuge, to which one commits:

3. The lion throne symbolizes the supremacy of a Buddha over the entire universe.

4. The vase of treasures symbolizes the eight noble riches.

5. The small and the large lotus symbolize the six perfections:

6. The four angles at the basis of the throne symbolize the four immeasurables:

7. The first step symbolizes the four close placements of mindfulness:

9. The third step symbolizes the four legs of magical manifestation:

11. The immovable base of the vase symbolizes the five forces.

12. The different aspects of the vase symbolize the seven branches of Enlightenment:

13. The base of the summit symbolizes the noble eightfold path:

14. The tree of life symbolizes the ten types of knowledge:

16. The umbrella and its support symbolize the victorious state of Enlightenment.

17. The two-part zaraisak symbolizes the ornaments of all the supreme qualities.

18. The moon symbolizes the elimination of all sufferings.

19. The sun symbolizes the radiance of the thousand lights of compassion.

20. The nada (the jewel) symbolizes the realization of all the aspirations. 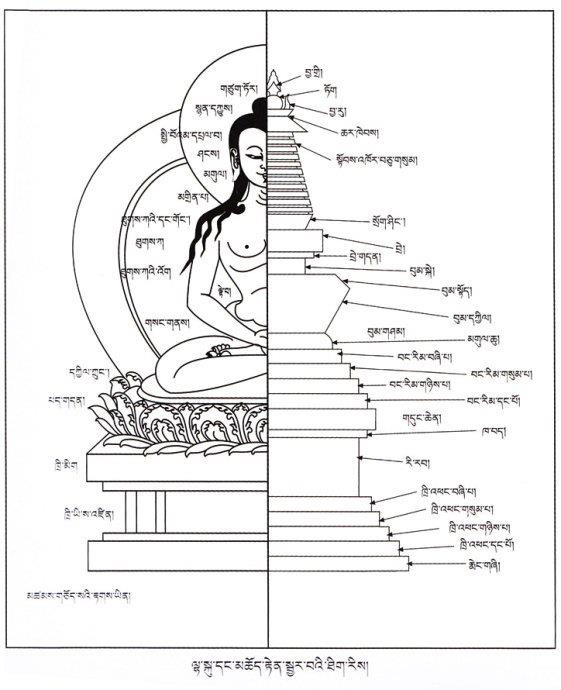